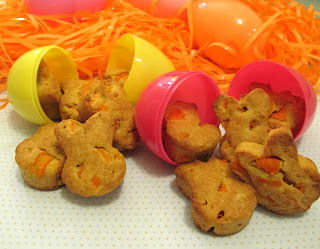 Target's seasonal section always drags me in when I do my grocery shopping. I usually try to stick to grocery stores so I stay focused on the food. Venturing into Target is just asking to buy things you all of the sudden "need" but is not on your grocery list such as a first aid kit, a razor, papermate pens, easter grass, and bunny shaped pans. They are so cute, how could I resist making treats that looked like Bugs Bunny?..... eh, what's up doc?

Store in an airtight container once on counter after thoroughly cooled for up to 1 week . Waiting until cooled is an important step; condensation can build and the moisture will cause treats to mold.

For longer shelf life: store in fridge for up to 2 months. Store in freezer for up to 8 months.
Tip: Write date on plastic bag to keep track of expiration date. 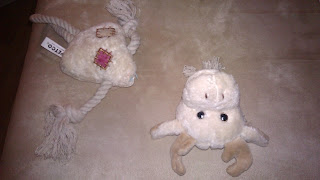 Mochi loves her toys. She will bring them to bed, cuddle with them, and cry for hours when they are stuck under the couch. There's a learning curve associated with finding Mochi the right toy though. Funny how dogs can have preferences. She couldn't care less for rubber toys. She loves her soft toys. Especially ones that are plushy and squeak. Unfortunately, I had to learn to get her toys without too much stuffing because she will rip their heads off in T-1 minute. I had just gotten her this all natural, organic toy that cost 3 times as much as her other toys and I kid you not, within 1 minute she tore it's head off and it's stuffing was scattered around my apartment.

So now, I pick toys that are fluffy or soft yet low in stuffing. See her top toys below! 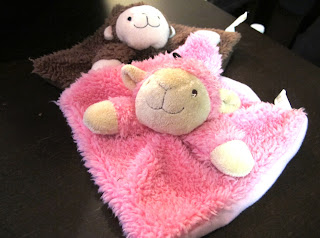 1) She absolutely loves monkeys. I had gone through 3 monkeys (decapitated, stuffing everywhere) until I found these sweet things at PetCo. It's a monkey with minimal stuffing. The brown one has lasted months so I went and bought her a pink one as well. She loves both of these monkeys.

It's not listed on their website, but I got these from PetCo in their 2/$5 section. 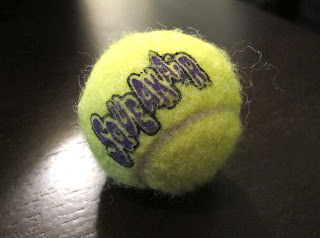 2. Tennis ball. She loves her mini tennis ball because she will make it squeak forever. She's taught herself the art of self-fetch. She'll roll or throw this ball and go fetch it for herself. These come in many sizes and the x-small is perfect for her. (plus! No head to rip off or stuffing to scatter) 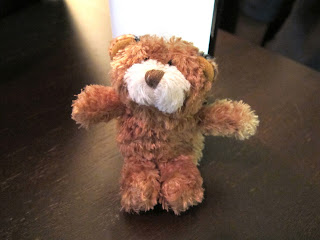 3. This cute little bear is also a fave. It's small and mochi-sized. She can fit the whole bear in her mouth. It also has minimal stuffing and a loud squeaker (love at first squeak for her). It also comes with a replacement squeaker as well! 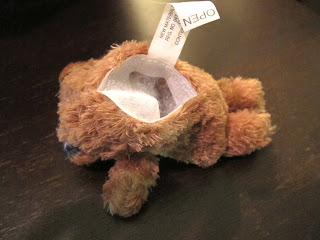 What are your pup's favorite toys?
Posted by Erica at 6:33 PM 4 comments:

What's the sexiest animals on the farm?

I had left over chicken from dinner today and decided to give my pooch a little happy meal. I threw 3 ingredients together, tossed it in the oven, and diced the chicken into small pieces. Happiest day of her life. It reminded me of my happy meal days.... oh like 2 weeks ago. Yeah, I still get happy meals - shhhhhh.

Store in an airtight container in the fridge after thoroughly cooled for up to 3 days .
Tip: Write date on plastic bag to keep track of expiration date.
Posted by Erica at 10:54 PM No comments:

Since dogs can only see limited colors, I believe their red or green color blind it doesn't make much different what color their treats are. So I try to stay away from artificial food coloring as possible. I pureed boiled spinach to achieve a natural green color and used white whole wheat instead of regular whole wheat to not interfere with the coloring. Voila! Magically delicious all-natural green treats just in time for St. Patty's.

1. Preheat oven 350 degrees.
2. Bring a pot of water to boil. Add 1 bag of spinach and boil for about 5 minutes.
3. Scoop out 1/4 cup of boiled spinach water and set aside.
4. Drain spinach. Put into food processor and puree.
5. Mix flour, olive oil, egg, soy milk, water from boiled spinach, and spinach puree together. Dough should have consistency of play doh.
3. Roll the dough into a 1/4-inch-thick roll. Use bone or floral cookie cutters.
4. Bake for 20-22 minutes.

Store in an airtight container once on counter after thoroughly cooled for up to 1 week . Waiting until cooled is an important step; condensation can build and the moisture will cause treats to mold.

For longer shelf life: store in fridge for up to 2 months. Store in freezer for up to 8 months.
Tip: Write date on plastic bag to keep track of expiration date.
Posted by Erica at 12:13 AM No comments:

I have these Wilton Mini Noah's Ark cookie cutters that I absolutely love. What's not to love about mini things?

You and me baby ain't nothin' but mammals so let's do it like they do it on discovery channel. [Insert disc scratch] It just got pg-13 in here. These animal crackers are doggy style so you can already expect it to get hot in here. Cue Nelly but dogs don't have clothes to take off (generally) and are always strutting in their birthday suit anyway.

Store in an airtight container once on counter after thoroughly cooled for up to 2 weeks . Waiting until cooled is an important step; condensation can build and the moisture will cause treats to mold.

For longer shelf life: store in fridge for up to 2 months. Store in freezer for up to 8 months.
Tip: Write date on plastic bag to keep track of expiration date.
Posted by Erica at 11:36 PM No comments:

For the Love of Pooch is back just in time for summer. Mochi and I moved back to Texas in February. It took time to get adjusted and back into the groove of things. When things finally settled, my parent's oven was out of commission. Now a new oven is in place and the treats are ready to be made again!

Houston summers are hot, hot, heat. It's already averaging the 90s in May. Look for many frozen treats coming soon! Uh oh, hot, hot, heat... time to break out in song!

How appropriate.... we owe YOU an IOU for being MIA for almost 6 months!

Hi blog readers!
For the Love of Pooch is officially on hibernation. 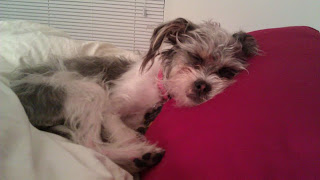 Mochi is a Texan at heart and had a hard time dealing with the winter in Minnesota. All the snow made her shiver. Even with a hoodie, a parka, and dog boots she would shiver every time we went on a potty break. She would come in and shiver some more and looked so miserable. It broke my heart to see her skinny butt suffer. 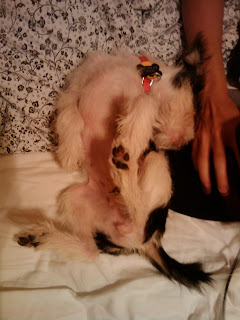 On my recent trip back to Texas, I brought Mochi with me and she's now staying at home with lots of other doggies to play with in the nice, warm weather. The treat making will resume upon Mochi's return once it warms up in Minnesota. 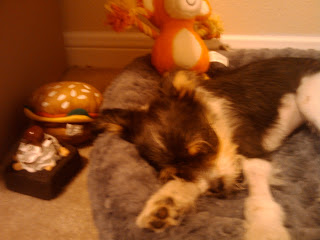 Until then.... feel free to email me if you have any questions about this blog, dog treats, baking, food, or whatever! Anything goes. Ericachung88@gmail.com.
Posted by Erica at 2:22 PM 1 comment:

Welcome to For the Love of Pooch!
This blog is a collection of treats that I have made for my pooch, Mochi. She's the official taste tester of all these recipes. It's easy to bake for your dog! Dogs have simpler palates than people so few ingredients are required to home-make your dog a healthy, delicious treat.
Feel good about what you feed your best friend. <3
More about FTLOP

The Many Faces of Mochi